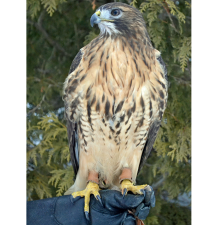 . During her first year, the hawk was hit by a car near Chicago, Illinois. Because the tip of her wing was too damaged, they amputated it, making full flight impossible. The Red-tailed Hawk arrived at Eagle Bluff in March 2001. 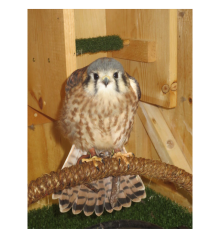 The American Kestrel is Eagle Bluff’s newest raptor. She arrived from Portland, Oregon in June 2013. During her first year (summer 2012), she was either hit by something or ran into something, injuring her left wing. Because she has never been in programs before, her training is a slow process! 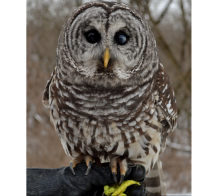 Eagle Bluff’s resident Barred Owl was hit by a car in December 2001 near Chicago, Illinois. The impact broke her right wing in several places. She also suffered head trauma, leaving her mostly blind in her left eye. She arrived at Eagle Bluff in January 2003. 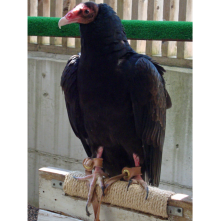 Eagle Bluff’s Turkey Vulture hatched in the spring of 2003. He was found by a person who thought he was abandoned, so they brought the vulture home with them to care for him. Unfortunately, this caused the vulture to imprint on humans meaning he prefers the company of humans more than his own species. He joined our raptor team in August 2011.