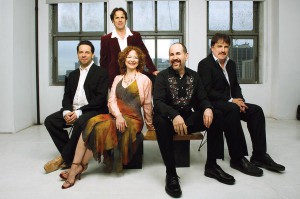 The Harmony Public Library and the Harmony Arts Board in collaboration with Riverside Concerts, Arts Midwest, the Mayo Clinic and the Southeastern Minnesota Arts Council present Traditional Eastern European Jewish music from the KLEZMATICS on Thursday, February 27, 2014 at 7 PM at the JEM Theatre in Harmony, MN. Admission is free. Refreshments to follow the performance.

The Klezmatics are world-renowned and Grammy-winning superstars whose music is steeped in Eastern European Jewish tradition and spirituality, while incorporating contemporary themes such as human rights and anti-fundamentalism with eclectic musical influences including Arab, African, Latin and Balkan rhythms, jazz and punk.

In the course of over twenty years they have released nine albums of wild, spiritual, provocative, reflective, and ecstatically danceable music, forever redefining and transcending traditional labels. 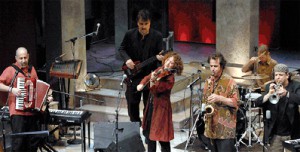 They have performed in over twenty countries at some of the most storied venues and renowned festivals worldwide, including Central Park Summerstage, Carnegie Hall, Pirineos Sur (Spain), Colours of Ostrava (Czech Republic), Pohoda Festival (Slovakia), Jazzsomer Graz (Austria), and the Heimatklänge Festival (Germany).

The Klezmatics have garnered numerous awards and accolades throughout their career, including a 2006 Grammy Award for Best Contemporary World Music Album (for Wonder Wheel: Lyrics by Woody Guthrie), a New York Jewish Music Award (Best Klezmer Band, 2006), a GLAMA (Gay and Lesbian American Music Award) and the German Critics Award (twice), and have topped the Billboard world music charts on numerous occasions.

This event is a free concert preview of a full length performance that will take place in Rochester, MN at the Mayo Civic Center Presentation Hall on Saturday, March 1 at 7:30 PM